About a month ago, I went on, hands down, the worst date of my life. Never mind, it wasn’t even a bad date. Instead, it was basically like someone transported me into my own personal version of hell for nearly an hour.

A little background information about the situation:

I’d been seeing this dude for a few weeks and was totally turned off by the fact that he had a small child that looked exactly like him. My friends were saying things like, “Uh, WUT? You can’t date someone with a kid. That’s not you. This is going to be like very Mommy Dearest.”

I’m a great listener, though, so I decided to keep seeing him.

While some women do like the whole Daddy thing, I would rather stick my hand into my food processor than date someone with a kid. It’s an established fact about myself. It not fair on me or the kid because I currently feel like children are a burden to society.

Honestly there was nothing wrong with this guy. Okay, that’s a lie, but on the surface, he was your standard nice guy. He was good looking, seemingly sweet, and did cute things like buy me flowers. But there was one thing I couldn’t get over.

Scratch that. There were two things I couldn’t get over. His teeth and his voice.

His teeth were the nail in the coffin for me. It’s not like they were jacked up or anything. They were incredibly nice, but why did every single one of his shiny teeth show when he smiled? Why did he clench his mouth together and talk through a smile? Smiling with your 702 teeth clenched together, while speaking is like one of the creepiest things a person can do.

And don’t get me started on his voice. His voice was like a thousand pencils being electrically sharpened inside my ear drum. He spoke like an announcer at a high school baseball game.

“And here comes Rannnnndddddyyyy, sliding into a second. And WHOA! Did you see that amazing catch from second baseman, Johnathan Peters? Amazing form. He’s only a junior, but God only knows what talent he’ll bring as a senior.”

That’s honestly the best way I can describe it. I don’t know. It was weird.

Pretty normal flaws to pick out about a person, right?

Even though his teeth legitimately gave me true fear, I was bored and lonely. So, one night I lined up a date to go meet him in Huntington.

I got to the restaurant a bit early and waited for him to show up. I wasn’t about to sit alone for 10 minutes, so I walked into an Urban Outfitters across from where we were eating. As I browsed through some records, I noticed someone jump out from behind a clothes rack.

Oh boy. This was gonna be fun.

Immediate regret washed over my soul. Yep, I felt completely dead inside. He gave me a big hug and I felt one of my ovaries just entirely remove itself from my body.

We walked into the restaurant and sat down at the bar. He smiled, talking through his teeth that looked like the The Wall from Game of Thrones. I imagined a tiny Jon Snow climbing over his rock of a tooth.

I was peer-pressured into ordering a margarita, my least favorite cocktail of all time. Many people love margaritas, but due to the amount of them that I’ve personally thrown up onto the floors of Mexican restaurant bathrooms, they’re not my go-to.

In a power move, he told me that he’d be ordering a margarita for me. He was choosing.

I like a man who is a bit aggressive, but this felt like your high school prom date trying to show off by ordering you the shrimp ragu. I laughed and said, “Okay, whatever. I was kind of thinking about the blackberry one.”

“Well, I guess you’ll just have to see which one I order for you,” he said, still talking through his Mister Ed teeth. 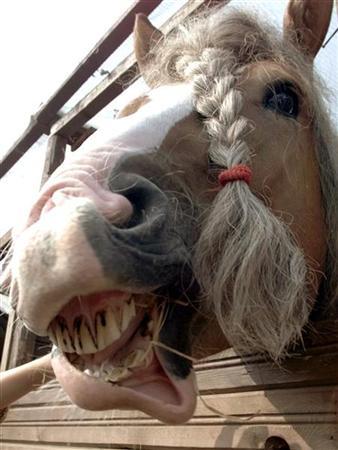 Naturally, he ordered the one that I wanted and then misprounced his own drink. I barely even speak Spanish and he spoke it fluently, so how did that happen? Not sure.

Conversation was sparse to say the least. This is where it gets good.

First, we talked about boring things like the weather, but then it took an unexpected turn when he leaned over into my ear and sexily said:

“So, your roommate… she’s sort of fucked up, huh?”

How did we go about talking about the Santa Ana winds to my “fucked up” roommate/friend and why are you trying to make this an intimate moment? I had so many questions.

“Dude, you’ve met her once and she was a sweetheart to you, what are you even talking about?” I said, attempting to avoid a sunburn on my retinas from his bleached teeth.

Seriously, was he using 98 Crest Whitestrips per day?

“No, she’s fucked up!” he aggressively countered me.

“Okay, in what way, because I certainly don’t think that? I mean, everyone has their own issues, but I honestly have no clue what you’re talking about,” I bit back.

He sighed dramatically to the point where people from about 19 tables could hear.

“Look, you know what I’m talking about,” he said as he gripped my hand and clenched his teeth all in the same motion. He looked like he just sharted.

This was just beginning to get weird. I still had about 30 more minutes of this to work through.

“What’s up with our waiter, he’s such a douche!” he began to complain within earshot of the guy serving our table.

“I don’t know, I guess maybe he had a bad day. I can’t imagine that he grew up wanting to be a waiter at 30,” I responded.

“Yeah, well fuck that! If I’m paying someone a tip, they’re going to work for it. He’s acting like a little bitch.”

K, let’s keep in mind that the waiter is hearing this entire conversation and my face has officially turned into something that looked close to a melting clock from a Dali painting. I was in sheer horror.

I’m one of those people that lets that shit go. Because, being a waiter sucks and I suppose I have a limited amount of empathy for others? It’s not a big deal. I’m on a date to have fun, not make other people feel uncomfortable.

Our food came out and he aggressively took our plates from the guy like a teenage girl who just got her period for the first time. I took about two bites out of my burrito and decided I had lost my appetite. The waiter came back by and asked how everything was, in which I took the opportunity to go ahead and grab the bill. I knew otherwise I’d be there all night dealing with this shit.

When the bill came out, I cannot make this up: he threw his credit card at the bill and then picked up a knife and stared at it for about 10 solid seconds.

My eyes turned towards the empty barstool beside me as I glanced at an imaginary person like, “Are you seeing this shit?”

We left the restaurant and he didn’t speak a word to me. Finally, I decided to say something.

“So, what’s up with all your negative vibes tonight? You’re acting really fucking weird.”

Probably not the best thing to say to someone who’s about to kidnap you, but I needed to know.

“I have no clue what you’re talking about. That was an amazing date! I wanted to keep hanging out! I was having a great time and you just had to end it,” he said sullenly as we approached my car.

“Yeah… no. Things were definitely weird,” I responded through his shirt as he awkwardly embraced me.

I stood there with my armed pressed against my side, while he began to boa constrict around my body.

I was released from the prison of his arms and he then began walking away in the most dramatic way that I’ve ever seen in my entire life. It was like bad child acting. He quite literally stomped off, dragging his feet with each step.

I got in my Mini Cooper, took a second to collect my thoughts, and drove past him.

As my car got closer to whatever weird Frankenstein walk that he was doing, he quickly turned around in a flash, popped his head up, produced one of those psycho clenched teeth smiles, and began frantically waving to me.

What the fuck… I had to get out of here, like yesterday.

I drove up to the voucher guy and handed him my ticket.

“I’m sorry ma’am, we need a bill from the restaurant to validate this ticket,” he rehearsed.

“Look, dude. I just went on the worst date of my life and there’s no fucking way that I’m going back to get the bill from the guy. He’s crazy and I need to get out of here,” I pleaded.

He let me through. It was a good thing, because I was prepared to drive through the barrier at any given second.

As I drove home, my phone kept flashing with messages.

While this isn’t the end of this story, I feel like this is a good place to cut it off before I dive into part two.